It’s a question as old as the SaaS business model itself - Should you require customers to enter their credit card details in order to sign up for a free trial?

I don’t care what anyone else says, or what their data shows. BugMuncher will never require payment details for a free trial. I won’t even run an A/B test to see what converts better. No is my final answer.

I feel strongly about this because of my own experiences as a customer of subscription services. If I’m looking to try your web app, and you require a credit card to sign up for the free trial, I instantly feel like you’re trying to trick me into paying. It’s a deal breaker. Unless I’m already positive I want to pay for the service, I click away.

I’m fairly confident that if BugMuncher did require payment information up front, revenue would increase slightly, but only because there would be some customers who forgot to cancel before their trial expired. So I get an extra few dollars and piss someone off in the process, not to mention a good chance of an email requesting a refund. Is it really worth it?

I’ve previously been stung by forgetting to cancel a subscription before the end of the trial, and it left a bad taste in my mouth. When a customer chooses not to continue after the free trial, it doesn’t necessarily mean they didn’t like the service, just that it didn’t fit their use case. They may still recommend the service to others, but that’s less likely if they were unexpectedly charged for it.

Here’s some good reasons not to require payment details for your free trial:

If you were around at the beginning of BugMuncher, you’ll know that initially I did require payment details for a trial. There was a valid reason for that though - I built the first version of BugMuncher very quickly as an MVP, and the quickest way for me to implement a trial was by using PayPal handle the whole thing. I wasn’t happy about it at the time, and I dropped PayPal as soon as possible, which allowed me to stop requiring payment details up front. So by ‘never’, I really mean never again.

This blog post serves as a promise - I swear on both of my beautiful eyebrows that BugMuncher will NEVER (again) require customers to enter their payment information to sign up for the free trial.

It’s been nearly two years since I wrote this, and I’ve just discovered some data that backs up my feelings on this matter. Back in 2012, Totango conducted a survey of SaaS companies, and found the following: 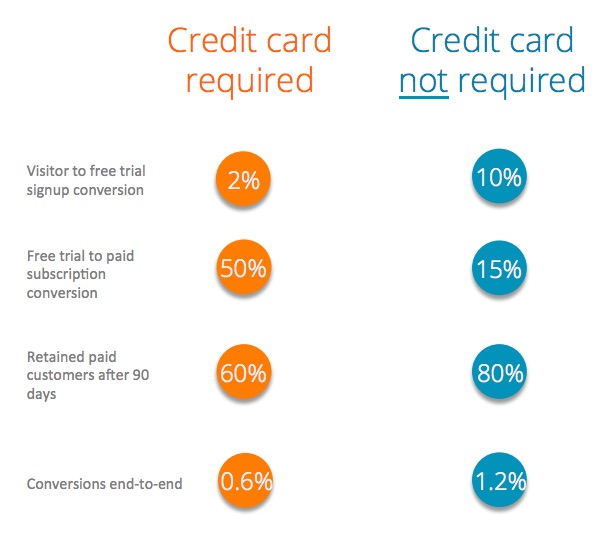 The survey results clearly show that while requiring a credit card gives better trial to paid conversion rates, both sign ups and retention suffer. The end result is that the companies that don’t require a credit card for their free trial had twice as many end-to-end conversions, compared to those that do require payment details up front.

It may have taken two years, but I think this post now covers every angle, there really is no good reason to require payment details for your free trial.